First biography of Dr. Susan Dimock to be published next year 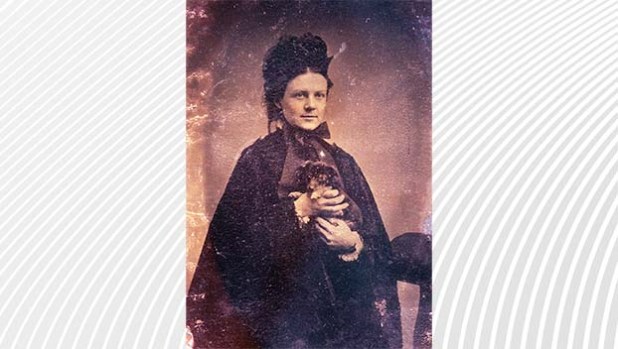 Dr. Susan Dimock (1847-1875) was a Washington native who paved the way for women to become medical professionals. Dimock never practiced medicine in Washington; however as a young woman, she was an assistant to Dr. S.S. Satchwell tending to patients in Beaufort County. Susan Wilson is writing a book about Dimock which will be published next year. Photo used with permission from Susan Wilson. 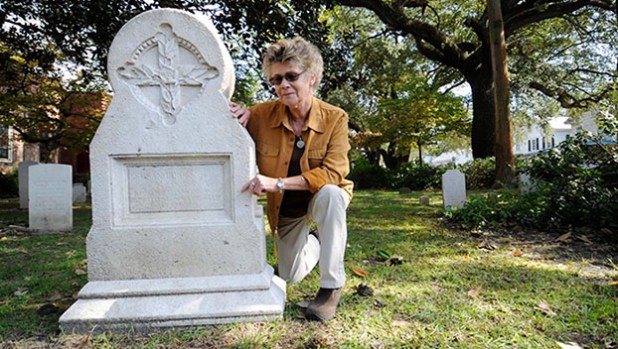 Susan Wilson kneels beside Dimock’s headstone which she helped bring to Washington from Boston. Photo from 2016 by Vail Stewart Rumley.

This time next year, Washington history buffs will have Susan Wilson’s book on their Christmas lists.

Dimock (1847-1875) was the daughter of Henry and Mary Melvina Owens Dimock of Washington who owned and operated the Lafayette Hotel on East Main Street. Wilson described her as one of the “greatest heroines of North Carolina.” It was evident early on that Dimock was a brilliant child. Dimock was tutored by her mother, a teacher, before they created a private school for young women so Dimock could learn among her peers. Dimock then attended the Washington Academy as a pre-teen. It was there she discovered a love of reading Latin. Her love of reading Latin parlayed into reading medical books because they were written in Latin. Across from the Lafayette Hotel lived Dr. Satchwell took Dimock under his wing – giving her books to read and taking her on house calls in the countryside and worked as his assistant, according to Wilson.

This continued until the Civil War began and Union Troops occupied Washington. By this time, Dimock’s father passed and it was just her and her mother. They left Washington for Boston, Massachusetts where they lived with family members. For the next decade, Dimock spent time learning about women’s health at the New England Hospital for Women and Children as well as traveling to Zuirch to receive a formal education in medicine. When she returned, she became a resident at the New England Hospital, training future female medical professionals. In addition, she graduated the first professionally trained nurse, Linda Richards, Wilson shared. Dimock was also the first woman to be inducted into the North Carolina Medical Society in 1872.

At the age of 28, Dimock wanted to travel to Europe for a vacation and to purchase (at that time) the most modern medical equipment. She traveled by ship hoping to take the English Channel into Europe. Inclement weather caused the ship to wreck in the Isles of Scilly off the English coast near Cornwall. Wilson said the mindset in the Victorian Era was not women and children first more like everyone for themselves. She said 90 percent of people on the ship did not survive, including Dimock. There were over 300 people on the ship, but there were 34 survivors.

Dimock is buried in Forest Hills Cemetery in Boston, but there is a grave marker for her at St. Peter’s Episcopal Church in Washington, according to Wilson.

Wilson’s journey learning about Dimock began in 1994 as a freelancer for the Boston Globe writing history columns for the newspaper. While perusing archives at a library in Boston, she came across several news articles from 1875 about the horrific shipwreck off of the Cornish coast describing Dimock’s untimely death. That day snowballed into nearly three decades of research and presentations about Dimock’s life. At those presentations, audience members would ask Wilson if there was a biography about Dimock they could purchase and read. Those requests led Wilson to writing “Women and Children First.” The name was inspired by one of Dimock’s specialties and her death.

Writing any person’s biography is a huge undertaking that requires careful attention to detail and a considerable amount of time. This is amplified when an author is writing their first biography of a historical figure. Wilson has authored several books and articles about Boston history, but the first biography about Dimock is also the first biography Wilson has written. Wilson said Dimock’s story “seemed so important — and so inspiring, fascinating, and poignant — that it just had to be told in the fullest form possible. It’s not just inspiring to young girls in STEM and women med students, but to anyone who has persisted in following a dream that seemed impossible.”

“History is a living entity, and I am just doing my part, I guess, in trying to keep it alive, vibrant, and relevant today,” Wilson said.

When asked why people should learn about local history, Wilson said it can inspire someone to chase after their dreams if someone from their area did the same and succeeded.

“Everybody needs a role model,” Wilson said, “In the case of Susan Dimock, it’s lovely to see heroes from afar and that’s wonderful but to know there’s something special about knowing someone from your town or your street or your state…the closer to home it is, it’s like ‘you know what, if she can do it then I can too.’”

After the book is published, Wilson hopes to visit Washington to share Dimock’s story with Washington natives and residents alike.

Wilson “is currently the official House Historian of the Omni Parker House and a Scholar at the Brandeis University Women’s Studies Research Center. The recipient of a B.A. (Phi Beta Kappa), M.A., and A.B.D. (All But Dissertation) in history from Tufts University, Susan taught history at both the secondary school and college levels before moving into a career in journalism and photojournalism,” according to her personal website.