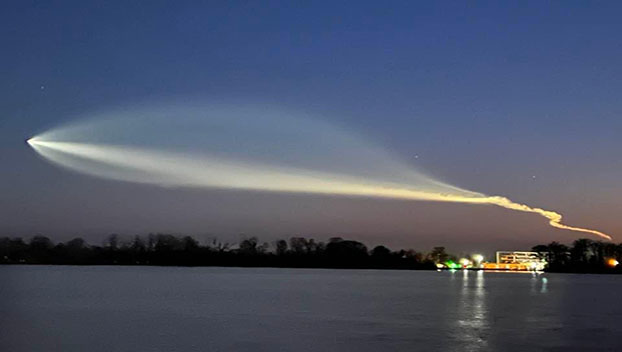 Katherine Tate didn’t know what was flying through the night sky, but knew it was important enough to run to her pier to take a photo. Later she learned it was the SpaceX Falcon9 rocket launched on Friday, Dec. 16 from Cape Canaveral space force station in Florida.

The rocket launched at 5:21 p.m., but Tate took the chance photo at around 5:52 p.m. at her home looking toward Chocowinity.

“We were just sitting there around a little fire in Adirondack chairs. I just turn my head and I see this thing flashing through. It was going fast,” Tate said. Shocked,  she “took off running for the pier to get stuff out of the way” and  “just started snapping.”

She had just purchased a new cell phone that captured a clear photo. Her previous phone, she said, would have taken “a blurry smudge,” she said.

She posted the photo to social media where friends commented and revealed it was the SpaceX Falcon 9.

The Falcon 9 is a reusable two stage rocket designed for transportation into Earth’s orbit and beyond, according to the SpaceX website. “It is the world’s first orbital class reusable rocket.”

It is 229 ft.tall and its diameter is 12 ft. It weighs more than 1.2 million pounds. It has had 191 total launches, 149 total landings and 128 re-flights. Falcon 9 made its first launch in June of 2010. “SpaceX designs, manufactures and launches advanced rockets and spacecraft.” It was founded in 2002 by Elon Musk who is the CEO of electric car maker Tesla.