State Trooper is on a road to recovery from cancer diagnosis 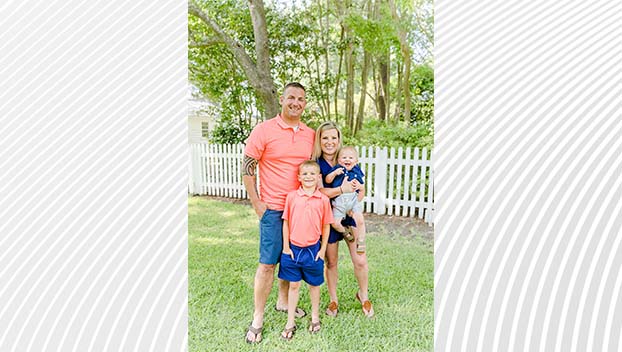 Trooper Zach Martin with his wife Ginny and their two sons, Greyson and Lawson. Martin was diagnosed earlier this month with Ewing’s Sarcoma. Those who would like to make a financial contribution to help the Martins pay medical bills may do so by searching the Police Benevolent Fund’s Facebook page. Photo courtesy of Ginny Martin.

State Highway Patrolman Zach Martin and his wife Ginny Woolard Martin are “grateful” for the prayers and words of support and encouragement they’ve received from family members and friends. They’re words and the Martin’s faith in God has helped them persevere through a life-altering diagnosis Zach received a few weeks ago.

Martin, of Washington, was diagnosed with Ewing’s Sarcoma a couple of weeks ago. Ewing’s, also known as Ewing’s Family of Tumors (EFST), is a sarcoma of bone. It is rare with less than 500 cases diagnosed annually in the United States, according to the Sarcoma Foundation of America. “It most commonly occurs in the second decade of life, although it can occur in younger and older patients…This tumor is most common in Caucasians, and is quite rare among those of African descent.  The tumor most often occurs in the extremities, although 40% occur centrally in the pelvis, vertebrae and chest wall.”

It all started in August when Martin began experiencing “excruciating pain” on the left side of his groin. The pain progressed leaving him barely able to walk.

He went to his primary care physician first who sent him to ECUHealth’s sports medicine department because his pain persisted. A doctor there believed Martin had a hip impingement based off of an initial X-ray scan. A hip impingement occurs when the ball of the hip pinches up against the cup of the hip. When this happens, damage to the cartilage that surrounds the cup of the hip can occur, causing hip stiffness and pain, and can lead to arthritis,” per Johns Hopkins Medicine.

At the doctor’s recommendation, Martin completed regular physical therapy; however, his pain still persisted. He began steroid injections into his hip which alleviated the pain for about a month, but then it returned and with it came an MRI and a bone scan. Dr. Gregory D. House with the ECUHealth Sports Medicine, showed the Martin’s a scan revealing a “huge, black spot” on Martin’s femur that “raised concern for him,” Martin described. This led to more testing in Greenville and at Duke Health. Martin had a biopsy done two weeks ago that required opening his leg and collecting a sample of a tumor in his femur, he said.

Days before Christmas, the Martin’s were given the results of the biopsy and Ewing’s sarcoma diagnosis. They believe the sarcoma has been detected early.

In his letter to the association, Myers wrote that he knew of Martin when Martin worked for the Beaufort County Sheriff’s Office. When Martin joined Highway Patrol, he was the first probationary trooper Myers trained.

“You get to know someone pretty well when you’re riding around in a car all shift with them for six weeks.  Over the next four years he has been working with us, we have become friends. So naturally when we heard of the diagnosis we all wanted to do what we could to help,” Myers wrote. “The PBA is a fantastic supporter of law enforcement and I know they do a lot to help fellow law enforcement officers with a varying amount of issues. That’s why I reached out to them. In hopes there was something that possibly could be done also to help Zach.”

Martin said when he was notified from the foundation that they would like to provide financial assistance through donations, he thought it was a scam considering the work he does. Myers confirmed to Martin the assistance offered was sincere.

Martin described it as a “blessing.” He and his wife “were not expecting anything like this.” They Martins feel very “fortunate” and “grateful” for the donations.

During the fall and holiday seasons, the Martin’s have relied on their faith in God and prayers said by family and friends to help them process his diagnosis. They hope what people learn from their story is to be unafraid to ask for help and to go to the doctor’s office at a loved one’s request.

Ginny added this difficult time for their family has helped make their faith “stronger.” She said it’s been amazing to watch support flow in from family, friends, co-workers and community members.

“God is placing the people in our lives that need to be there. He is constantly reassuring us that He has his hands in this and everything is going to be okay,” Ginny said, “He also reminds us that it only takes the faith of a mustard seed. When you believe He can do the things that He can do then there will be a complete healing.”

At this time, Martin said his family is doing well, trying to stay positive and praying a lot. “[We] are very fortunate for everything that has came our way and all the support we’ve gotten.”

Martin began his career in law enforcement in 2010 with the Belhaven Police Department. From there, he went on to work at the Beaufort County Sheriff’s Office the following year. He worked there for seven years before joining the State Highway Patrol. Martin will be out of work for an undetermined amount of time.

Martin has a PET scan scheduled and will discuss chemotherapy treatment options with doctors at the Duke Cancer Center in Durham.