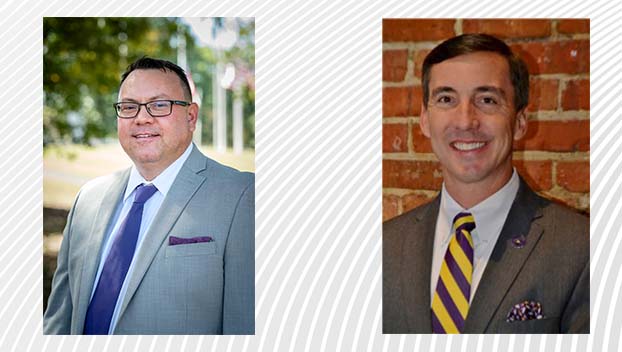 Though many of us do not make New Year’s resolutions (a recent poll on the Daily News’ website showed), Beaufort County Economic Development Director Brad Hufford and Washington City Manager Jonathan Russell have lists that are chocked full of resolutions for this year.

The first resolution on Hufford’s list is to reestablish an economic development advisory committee and have a strategic meeting on Jan. 25. The committee consists of about 15 people who represent areas throughout Beaufort County.

Hufford said monthly committee meetings dissipated during the COVID-19 pandemic and the transition in leadership from his predecessor to himself. Hufford is ready to receive insights from local stakeholders and keep them abreast of what his office is completing. He plans for the meetings to occur once a month.

Next on his list is to bring more companies to Beaufort County and have those companies inhabit existing sites and buildings that are not in use. He would also like to see existing companies expand into existing buildings that are not in use. The sites and buildings could either be leased or sold to the companies, Hufford hopes. In addition, Hufford would like to see more industrial sites in Beaufort County’s future. “We certainly have a good amount of product as far as just raw land and sites, but we’re always looking for folks that maybe would like to get that on the market to where it makes sense when they’re close to utilities for infrastructure as well as highway roadway…”

Beaufort County has two industrial sites which are the Washington-Beaufort County Industrial Park and Chocowinity rail site. Hufford said his office will be conducting due diligence studies to learn how to best advertise those sites to businesses.

A third industrial site is planned for Aurora; however, more funding is needed to cover the cost of construction. Hufford said there are several entities interested in purchasing land in Aurora including Beaufort County Community College. Though Economic Development secured a grant for the construction, increased costs of materials brought the project to a halt. His office is looking for alternative funding to bridge a gap between initial estimates and actual costs. “We really feel like that project is at the starting gate,” Hufford said.

Hufford is looking forward to watching how a partnership between Xelevate and Washington-Warren Airport is cultivated this year.  “We really feel like Washington-Warren airport has a ton of potential and I think everybody realizes that more now that we’ve done the airshow and we can see the types of technology Washington and Beaufort County could be leaders in.”

Hufford added that improving the airport puts the county in a good position to someday soon attract aeronautical companies. In talking about drone technology’s increasing popularity, he said it would be “great for Beaufort County’s future to be at the cutting edge of that.”

While there are plenty of things to be excited and hopeful about, Hufford knows there will be challenges to overcome. The main challenge is increasing the workforce.

“That’s ultimately what the county is wanting is the new announcement of jobs,” Hufford said.

He explained that everyone would like to see younger people work and live in Beaufort County. When talking to employers of small and mid-size businesses, he has found they want employees who live in Beaufort County and have a short commute; however, finding housing in the county can present a challenge. “We’ve got some folks who I think would be interested in developing affordable homes, neighborhoods and that has to stretch from single-family detached homes to multi-family apartments and those in between…”

He continued to say Beaufort County has lots of amenities that would be attractive to young families; however, a lack of housing in the county pushes those families to surrounding counties. “I think we really could corral a lot of those folks to stay in Beaufort County if we could solve this housing issue.”

Hufford said a committee will be formed to strategize how to increase the county’s workforce.

Beaufort County Economic Development is planning to host two annual job and resource fairs. This would be open to local employers, the community college and others.

Lastly, Hufford discussed how Beaufort County Economic Development can contribute to the goals the City of Washington has for its future. “We know that Washington is the county seat, but also really a lot of the growth engine for Beaufort County. We certainly want to do all we can to coordinate our resources – housing utilities and small businesses development, entrepreneurship – a lot of those things run right through Washington’s Main Street. We certainly want to be that asset for them.”

“Keep the momentum” is on Russell’s New Year’s resolution for the City of Washington. He says Washington is heading in the right direction and he wants to see it continue. Meaning, there has been recent growth and development in Washington and Russell would like to see it persist this year.

Sticking to the New Years resolution, Russell said the city is working on recruiting traditional chain retail stores and restaurants. He said “interest is still high” to add those to the 15th Street and Carolina Avenue corridor. “Hopefully we’ll see something come there in the upcoming year.”

Washington residents can expect to see the addition of a Royal Farms and a Planet Fitness at the intersection of Highway 264 and Clarks Neck Road. Royal Farms is planned to be adjacent to the Hampton Inn hotel, but the Planet Fitness is planned for a space that was once a Food Lion. Those projects are anticipated to be finished by the summer.

The city will also see the completion of the new police station by early April and improvements to local parks like Bug House which is getting new playground equipment for young children ages two to five years old. At city council’s meeting on Monday, Jan. 9, they will discuss adding lights to the soccer fields at Susie Gray McConnell Sports Complex. With lights, Russell says the fields can be used more often throughout the year and host tournaments. City council will also discuss the possibility of adding a splash pad to the Seventh Street Park behind the Bobby Andrews Recreation Center. Russell said the City of Washington is in the planning stages of improving the aesthetics of Veterans Park.

Coming up this year is phase two of the streetscape plan to improve downtown Washington.

Phase one has already been completed. It focused on utility work that was mostly underground.

Phase two will focus on the improving aesthetics from the Pamlico River to the intersection of North Market Street and East Third Street. It could include Main Street from Pitt Street Brewing to the Highway 17 bridge, space in front of the Beaufort County courthouse and East Main Street near Lane Blu and Wash and Wag.  Depending on funding, some projects from Phase Two may be pushed into the future and labeled Phase three projects.