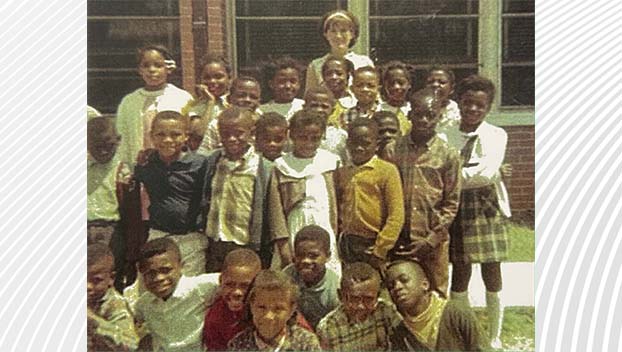 Marianna May stands with her third grade class at Washington Elementary School. She was the first white teacher at the school in 1967. May taught there for a year before she moved back to New Jersey to continue teaching. Photo courtesy of Marianna May.

Then twenty-three year old, Marianna May, did not know she would make local history when she and her husband, Tom, moved to Washington in 1967.

When May graduated from Trenton College (now known as The College of New Jersey), she and Tom moved to Washington, because he was going to East Carolina University in the fall.

May was told getting a teaching position would be challenging for her, because many wives of East Carolina professors were teachers in either Pitt County or Beaufort County. By the time she returned home from sending an application to the counties’ board of education, May received a call from Beaufort County Schools.

Soon after they moved, May was able to secure employment at Washington Elementary School (which no longer exists). May and Tom lived in a duplex owned by the Woolard family. When she told the Woolards where she would be working, they were perplexed, because they had never heard of the school, May shared.

“[The Woolards] said, ‘you better find out what they’re talking about because we don’t think there is such a school,’” May shared. “I asked around and they told me – so it was fine.”

When the job was offered to her, she was not told that it was a school for African-American students and that she would be the school’s first white teacher, May said. It didn’t bother her, because she had experience working with black students in New Jersey. She was active in the Head Start program in Camden City Schools when Head Start was approved by President Lyndon B. Johnson.

May interviewed with Mr. Beason, the principal at Washington Elementary and accepted an offer to be a third grade teacher there.

May couldn’t recall her first day of teaching at Washington Elementary School, but she remembered the day when her principal, Mr. Beason told her to go home for fear of threats to her safety. That was April 4, 1968, the day Dr. Martin Luther King Jr. was assassinated. Beason was concerned teens and young adults would try to harm May or vandalize her car.

She shared how Washington Elementary and P.S. Jones High School were not equal to white schools like Washington High School, because the buildings were in disrepair and P.S. Jones did not have a gymnasium. “They used to try to say separate but equal but that was not true,” May said.

May said she never felt uncomfortable while teaching at Washington Elementary. Everyone she came in contact with had respect for her and vice versa. Her students respected her as well.

May recently published a photo of her and her third grade class in the hopes of reconnecting with those students; however, she didn’t get any responses. She would still love to reconnect with them if possible.