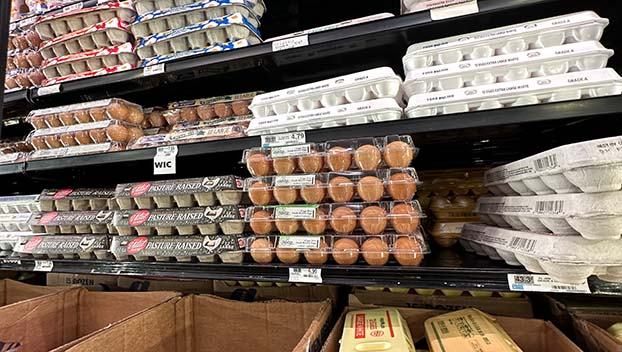 At Easter, children go on egg hunts to find brightly colored plastic eggs scattered but hidden across a large grassy yard. Those eggs become a child’s prized possessions (for the day at least). Not so different are adults looking for the cheapest carton of eggs at the grocery store. Because of an increase in the cost of eggs, they have become a prized possession – a delicacy among adults.

According to the U.S. Bureau of Labor Statistics, the price of eggs has increased 60 percent from Dec. 2021 to Dec. 2022. Per the Federal Reserve Bank of St. Louis, the current average cost of one dozen eggs in the United States is $4.25. Conversely, in December of 2021 a carton of a dozen eggs cost $1.78.

The primary reason behind soaring prices is a rampant bird flu (also known as Highly Pathogenic Avian Influenza) that is killing millions of hens from table egg laying flocks, Beaufort County Extension Director Rod Gurganus says. This does not nearly affect chickens raised for meat as it does egg laying hens and turkeys.

“From what I’m hearing, this recent outbreak in the last year is unprecedented,” Gurganus said. “It’s really taken out a huge number of birds and that has really reduced the egg supply.”

Bird flu can naturally occur in wild aquatic birds and can infect domestic poultry and other bird and animal species, according to the Centers for Disease Control and Prevention (CDC).

A secondary reason is that people are consuming more eggs for their source of protein over meat, because the price of meat has increased. Ground beef cost an average of $4 in December of 2020. Today, it cost a dollar more. At its lowest in November of 2009, ground beef cost $2. In addition, eggs were in high demand during the holiday season for cooking and baking.

Though there are few substitutes for eggs, Gurganus said eggs can be a substitute for a number of sources of protein. “You’ve got more people eating eggs for more protein, because theoretically they’re cheaper.”

Farmers are eligible for federal indemnity payments which assist in covering the loss of birds and eggs from avian influenza in addition to the cost of removing birds, cleaning and disinfecting birds. However, these payments do not fully cover farmers’ expenses and therefore they don’t always recover from an outbreak, according to a recent PBS article.