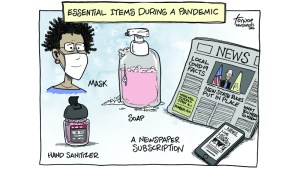 DEAN RIDINGS During this coronavirus pandemic, access to accurate and trustworthy information in your community is as critical to life under quarantine and as sought ... Read more

Boating Tips: Wonder why some boats go off course?

By Biff Matthews, Pamlico Sail & Power Squadron Along with PFD, personal flotation device, and hand held radio another safety item on your boat is ... Read more

Hyde County is mourning the passing of an old friend. At 93 years of age, one might expect the loss, but this was no ordinary ... Read more

Check out a book, go online

Going all out for voter ID

In these days of deep political division, there aren’t too many issues on which more than 75 percent of the electorate agrees. Requiring voters to ... Read more

My Turn: Beaufort County businesses could be in Jeopardy

By Jimmy Daniels As business owners on Blounts Creek, we are concerned that if Martin Marietta Materials is permitted to discharge 12 million gallons or ... Read more

Where have all the fish, plants gone?

By BOB DAW I am afraid of losing one of the things I care about most, know and love so well, and that is Blounts ... Read more

Congratulations to the Democrats. They won some key races. We Republicans do have some concerns. President Obama’s victory has made it very unlikely that ... Read more

This week the first case to be heard under the Racial Justice Act has begun in Cumberland County. Read more

The following remarks were made by Joey Toler, Beaufort County Arts Council executive director, during the introduction of the annual HeART of the City Christmas ... Read more