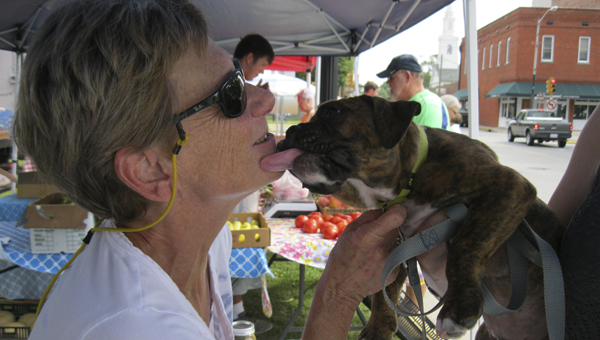 DEE KEEL | CONTRIBUTED
A PERSONAL THANK YOU: Here, Dee Keel, co-creator of the 2 Dawg Kitchen, is pictured getting a special thanks from a Boxer puppy, who loves her homemade dog biscuits.

CHOCOWINITY — A local couple has created an interesting product that has a lot of people barking.

Rufus and Dee Keel, of Chocowinity have become master bakers in their own right. As dog lovers, the two, originally from the area, lived on Ocracoke Island, and after having battled with the inconsistency of whether store-bought dog treats were safe for their dogs, they have found a way to become self-sufficient in supplying treats for their own. Living so far away on Ocracoke Island, it became difficult to maintain a reliable stock of dog treats so they started making. The Keels started concocting and baking homemade dog biscuits for their two dogs — Ruby, a cocker spaniel and Winston, a rescued Yorkie — and have dubbed the operation the 2 Dawg Kitchen.

“The main reason we got into it was there were just so many recalls on dog treats because so much of it was coming from China or wherever it was coming from,” Dee Keel said. “They were recalling all sorts of things that got mixed in. Things that were making dogs sick and some dogs were not living through it.”

After moving back to eastern North Carolina, the Keels, who love to bake and got involved in Saturday Market in Washington, realized the prevalence of dog-owners in attendance so they began baking homemade dog biscuits for the area’s canine population, she said.

“A lot of people go to the farmer’s market and bring their pets with them,” Dee Keel said. “We decided to add the doggie treats since we were going there and see if people would like natural doggie treats for their dogs and they did.”

Dee Keel said she and her husband make the biscuits with all natural ingredients. They make biscuits with chicken flavor, peanut butter, cinnamon and banana bread. Ingredients are added and the dough is rolled out and hand-cut into shapes of doggie bones, baked and put through a drying process to make them even crunchier, Keel said. The two also make chew strips — chicken and pork loin — which are popular among dog-owners in the area, Keel said.

“Dogs like peanut butter,” Dee Keel said. “Cinnamon is good for their digestive system just like for humans. It’s trial and error on recipes. I’ve thrown out hundreds of cookies. They’re tested and we’ll taste them when they come out of the oven just to see what it tastes like. If I’m not liking the taste, I’m not going to feed it to my dogs. We spoil our pets. I want to stay preservative-free and not use anything that’s so highly concentrated in salt.” 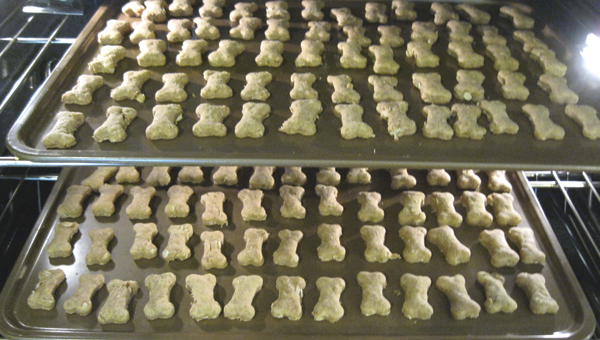 DEE KEEL | CONTRIBUTED
FINISHED PRODUCT: Dee and Rufus Keel’s dog biscuits are made from scratch. They roll out the dough, which contains cinnamon, chicken broth, banana bread or peanut butter, bake them in the oven and sells them at the Saturday Market.

The Keels not only participate in the market, but they also set up shop at the Washington Summer Festival and Tractor’s Supply when veterinarians come to give vaccinations every couple months or when the store has pet rescue events, Dee Keel said. Although Saturday Market is not operational during the winter months, Keel says the treats can be kept in the fridge for a few weeks and in the freezer to keep for longer.

“We have repeat customers that are buying them now and putting them in the freezer,” Dee Keel said. “The ones that have been buying from us, we’re working out something where I meet them every couple of weeks with fresh treats for their pets. Our pet owners really love our treats. It takes a lot of time in the kitchen, especially getting ready for Saturdays, but we like for the treats to be fresh each week. We hope to slowly have the business grow for us.”