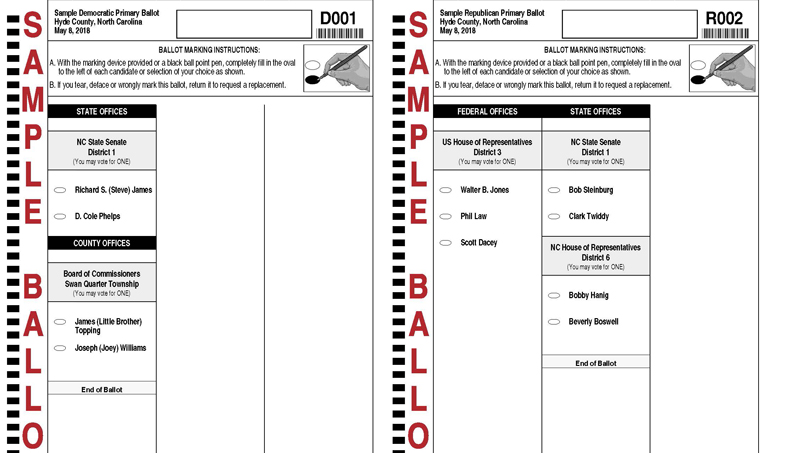 The Hyde County Board of Elections has released the early voting schedule for the May 8 primaries. Early voting begins today and ends May 5.

On Ocracoke, early voting will take place at the Ocracoke Volunteer Fire Department from 9 a.m. to 5 p.m. April 27-28.

In the primary to decide the Democratic nominee for the Swan Quarter Township seat on the Hyde County Board of Commissioners, voters will mark ballots for either Joey Williams or James “Little Boy” Topping. There is no Republican candidate for that seat.

Republican Ken Collier is the lone candidate for the Currituck Township seat on the Board of Commissioners.

State House District 6 incumbent Beverly Boswell, a Republican, faces a challenge in the Republican primary from Bobby Haning. Boswell is seeking a second two-year term. The winner of that primary faces Democrat Theresa Strickler Judge in the general election.

Eligible Hyde County voters will choose between incumbent Walter B. Jones Jr., Phil Law and Scott Dacey to represent the 3rd Congressional District, which includes Hyde County. The winner of that primary faces no Democratic opposition in the general election.

Several unopposed candidates who face no primary challenges will be on ballots for the Nov. 6 general election. They are incumbents Carl “Guire” Cahoon, sheriff; Brandy C. Pugh, clerk of court and Merita Lewis-Spencer, register of deeds.

There are two supervisors’ seats available on the Hyde County Soil & Water Conservation Board this year. The filing period for those seats is June 11 through July 6.