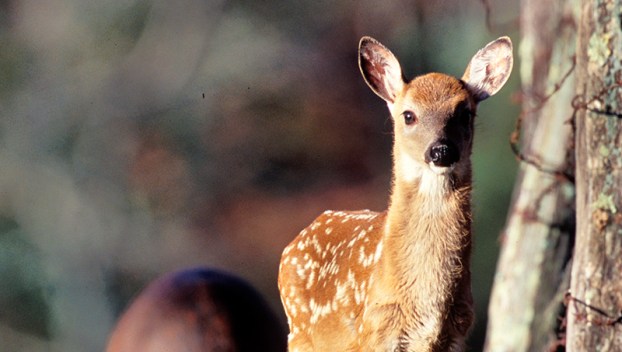 This spring, help not harm

Spring is all about new life: buds blooming, trees leafing out, birds hatching — the beginning phase of the life cycle is in full swing. So many people appreciate the local wildlife whether they call themselves animal lovers or not. So many people are out and about appreciating the warmer temperatures, taking walks in the woods and experiencing nature.

But there are times when being an animal lover and running across an animal in its natural habitat can create a situation that, no matter how well-intentioned, is ultimately bad for the animal. Such can be the case with white-tailed deer fawns. Fawning season runs from April until June. What many people don’t realize is that if they run across a white-tailed fawn with no mother in sight, it doesn’t mean that fawn has been abandoned. White-tailed deer are “hiders,” meaning the female deer will hide the fawn in foliage during the first weeks of its life to go feed. Between fawns’ lack of scent and its spotted camouflage, the baby is quite easily hidden from predators. Not only that, but at five days old, a fawn can outrun a person.

Unfortunately, some might encounter a fawn in hiding, assume it’s been orphaned and take measures to do some good.

“Each year, fawns are taken out of the wild by well-intentioned individuals who mistakenly assume they are orphaned or have been abandoned,” said Jon Shaw, a deer biologist for N.C. Wildlife Resources Commission. “However, it is rare for a doe to abandon her fawn, although she will leave it for hours at a time, she returns periodically to nurse it. … If you find a fawn, leave it where it is and check on it the following day. If it still there and is bleating loudly, appears cold, weak or thin, or is injured, it might be orphaned. However, do not take it out of the wild.”

It’s not only a bad idea to remove a fawn from the wild, it’s also illegal. Instead, Shaw recommends contacting a local, permitted fawn rehabilitator through Wildlife Resources. These are the people equipped to care for a fawn and misguided attempts by those trying to “save” a fawn typically do more harm than good, according to Wildlife Resources.

Sometimes a hands-off approach is the right approach — appreciate from a respectful distance. This spring, make sure to help wildlife, not harm it.

It’s a well-documented fact that voter turnout tends to slump during primaries and mid-term elections. With this being a primary... read more