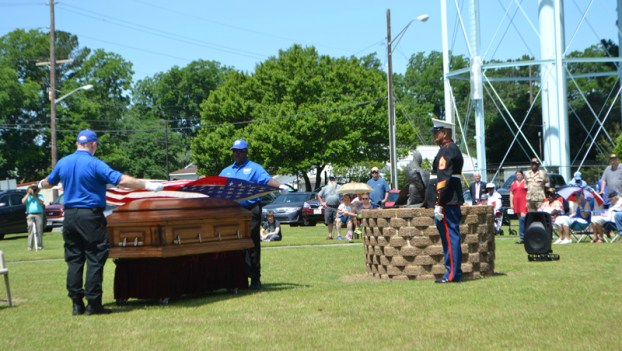 HONOR THEM: Memorial Day is set aside to pay tribute and honor the nation’s war dead. They should be honored every day. (Mike Voss/Daily News)

An editorial cartoon by R.J. Matson depicts an inkwell with a pen in it, a tombstone inscribed with “Fallen heroes” and flanked by two small American flags and a sword thrust into the ground in front of the tombstone. At the bottom of the cartoon is this message: “The pen is mighty grateful to the sword.”

That’s just one appropriate Memorial Day message. Because of the ultimate sacrifice by American war dead since 1776, our right to freedom of speech remains intact and strong. Those war dead also insured our rights to vote, bear arms and equal treatment under the law.

Memorial Day is a time to reflect on those Americans who died serving their country, whether on foreign battlefields, the high seas and in the skies around the world — and reflect we should. Without their sacrifices, we might not be able to enjoy this national holiday. So if you celebrate Memorial Day with a cookout, trip to the beach or by attending a Memorial Day service at a veterans memorial park, do so remembering those who made it possible for you to celebrate. Because they cannot celebrate, we must celebrate for them — and honor them as we do that.

“It is foolish and wrong to mourn the men who died. Rather we should thank God such men lived.” — Gen. George S. Patton.

“In the end, we will remember not the words of our enemies, but the silence of our friends.” — Martin Luther King Jr.

“Memorial Day isn’t just about honoring veterans, it’s honoring those who lost their lives. Veterans had the fortune of coming home. For us, that’s a reminder of when we come home we still have a responsibility to serve. It’s a continuation of service that honors our country and those who fell defending it.” — Pete Hegseth, a former major with the Army National Guard, recipient of two Bronze Medals and a veteran of the Iraqi War.

“That’s why we can’t have nice things.” You or someone you know may have grown up hearing these motherly words... read more