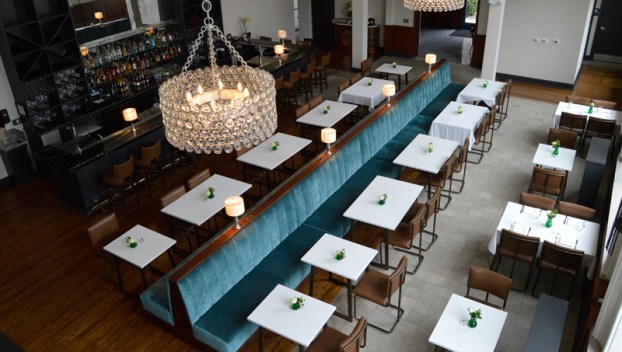 SIGN OF THE TIME: The opening of The Hackney in the former Bank of America building is proof of are resurgence in downtown Washington. (Daily News)

Washington’s efforts to improve its downtown/waterfront areas are paying off. Several developments in the past two to three years are bearing fruit.

The opening of The Hackney is proof of that. That project took a building that had been vacant for several years and turned it into a welcome addition to the downtown offerings of the city.

The remodeling of the first floor of the former Washington Jewelers building resulted in Copper Canyon Wellness going in there. Planned for the upper floors are residential units. Work continues on the former building that once housed the Little Shoppes of Washington, with a mixture of commercial and residential uses planned.

Those are the bigger project. There are several smaller projects, too.

Take the Arts of the Pamlico’s effort at providing are for the downtown alleys. It’s decorated some of the alleys with artwork. Then there’s the streetscape plan for the downtown area. It’s designed to make entrances to that area more appealing. Downtown streetscape improvements are viewed by city officials as a way to help stimulate economic development and improve downtown aesthetics.

The four points of the program work together to create a sustained and comprehensive community revitalization effort. The four points are promotion, organization, design and economic vitality. The program’s efforts are having a positive effect on downtown.

The projects to improve the downtown/waterfront areas are underway, either in the planning stages or closer to completion. It bodes for an excellent future for Washington.

Educate yourself on American government

Consider this simple test: Can you name the three branches of the Federal government? Could you explain the separation of... read more