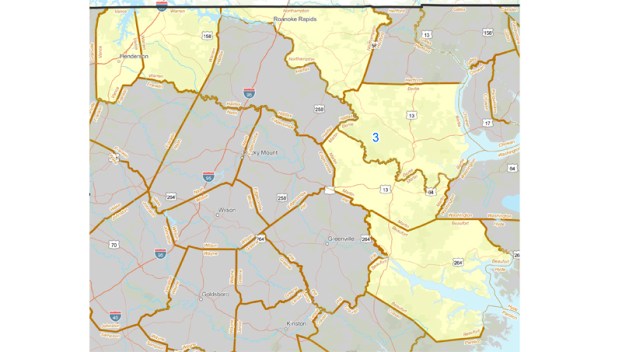 Did you know that Washington and Henderson share a North Carolina Senate District?

Encompassing six counties, spanning between the Coastal Plain and the Piedmont, North Carolina’s 3rd Senate District includes 3,236 square miles of territory and is home to 173,057 people, according to 2017 census data estimates.

To drive from one end of the district to the other, without leaving its boundaries, it would take more than four hours. While the district is technically connected by a 2-mile strip of land in Northampton and Warren counties, one would still have to go around Roanoke Rapids Lake and cross Lake Gaston to go from one end to the other. A little bit further, and you the family can take a day trip to Kerr Lake without leaving the 3rd Senate District.

So what do Henderson and Washington have in common that they should be represented together under one senator?

The simple answer is not much. In plain and simple terms, the 3rd is a gerrymander that incredibly manages to keep the six counties intact. So, one has to wonder, what is the driving force in shaping this district?

A couple of population statistics for 3rd District counties from the 2010 Census:

With all the talk of racial gerrymandering, and the court cases that have come about because of it in the past decade, one has to wonder why the 3rd District is shaped like it is, and who drew it to be that way.

From Ocracoke Alive The 20th annual Ocrafolk Music and Storytelling Festival will be held in the heart of the village... read more