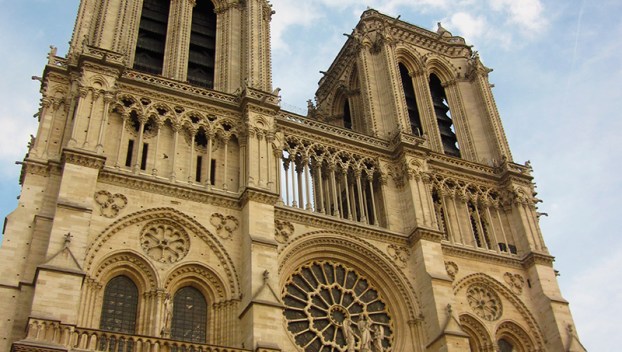 Love from their neighbors, near and far

This week, an icon burned. On the evening of April 15, Notre-Dame de Paris caught fire and burned for 15 hours. For nearly eight centuries, the cathedral, considered to be one of the finest examples of French Gothic architecture, has watched over Paris. Each year, approximately 12 million people visit to marvel over its rose windows, its sculptures, its sheer feat of architecture.

As the city, and the world, watched Notre-Dame burn, there was already hope building: hope that it would be recovered and restored. By the Wednesday, those in positions to do so had pledged nearly $1 billion to the effort. There is no question it will be rebuilt.

This religious landmark commandeered media broadcasts for 24 hours, grabbing viewers by the throat, prompting people to want to do something, anything, to help. The destruction of a house of God can do that, whether it’s by any natural disaster — flooding, tornado or earthquake — or an accidental fire, such as this case.

When the destruction of a house of God by a person consumed by hatred happens, it takes on a completely different resonance. What didn’t necessarily consume the airwaves recently was the arson of three historically black churches in St Landry Parish, Louisiana. Over a 10-day period starting March 25, St. Mary Baptist Church, Greater Union Baptist Church and Mt. Pleasant Baptist Church were set on fire. Each church was beyond saving. Holden Matthews, a 21-year-old white man and son of St Landry Parish Sheriff’s Office deputy, was arrested for the crimes.

These churches are not wealthy churches. They serve a poor parish where 30 percent of the population lives below the poverty line. A GoFundMe account was started to help them rebuild, but donations were lagging — perhaps it was lack of media coverage; perhaps it was that people in different parishes, in different states, didn’t connect to these congregations’ plight.

That is, until Notre-Dame caught fire. Between the Catholic Church having a net worth of some $30 billion and the growing number of pledges that came long before the fire was extinguished, it was apparent Notre-Dame would be taken care of. Yet people still wanted to contribute; they wanted to help. Someone, somewhere on social media, turned those people in a different direction, to those whose churches were also destroyed, but deliberately and maliciously.

The donations came pouring in. They still are — $5 from this person, $25 from that person. Occasionally, the donors list shows $100 or $1,000, but most are smaller donations from people who want to do something to help but may not have the means to do more.

By Wednesday evening, the GoFundMe campaign was nearing $1.5 million of a $1.8 million goal. By the time you read this, it will probably have surpassed it.

While there is no question the Notre-Dame fire was a tragedy, there’s also no question that good can come from even tragic consequences. Our Lady of Paris will be fine, but because of her, so will three congregations in dire need of faith in their fellow man, hope in a future without hate and love from their neighbors near and far.