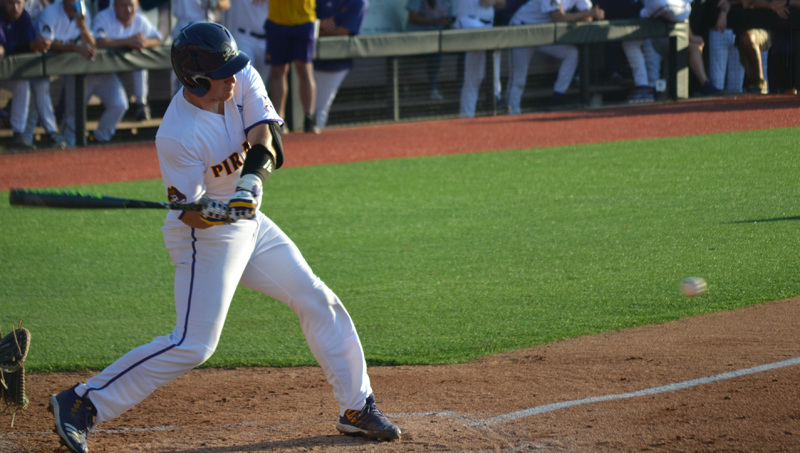 CLEARWATER, Fla. – Ross Cadena tallied three hits and drove in one run, while Brady Slavens hit a three-run home run in the ninth guiding No. 8 seed Wichita State to a 6-2 win over No. 1 seed ECU Tuesday afternoon in a first-round game of the American Athletic Conference Baseball Championships. With the win the Shockers improve to 27-29 on the season and move to the winner’s bracket game against No. 3 seed UConn on Thursday, while the Pirates fall to 42-14 and will play in the elimination game Wednesday at 3 p.m. (ET) against No. 4 seed Houston.

With the score knotted up at one-all going to the eighth inning, Cadena put the Shockers up 2-1 late in the ball game. Paxton Wallace doubled down the leftfield line to start the stanza and after ECU brought in Evan Voliva, Cadena singled to center plating Wallace for the would-be game-winning run.

Alex Segal (1-1) earned the win tossing 1.2 scoreless frames in relief where he allowed a walk and struck out one. Starter Clayton McGinness allowed one run (earned) over 6.1 innings on five hits with a pair of walks and three punch outs. Mitchell Walters gave up three hits and surrendered a run (earned) without recording an out and Jacob Linedmann notched his first save of the season working a scoreless frame with a walk and a strikeout.

ECU wasted little time in pushing across the game’s first run as it went up 1-0 in the first stanza. With two away, Spencer Brickhouse walked and came around to score on Burleson’s RBI double down the left field line.

The Shockers tied the game at one in the third when Jordan Boyer scored on a Burleson wild pitch. Boyer singled to left field with two outs, moved to second on a wild pitch went to third on a double steal with Luke Ritter and crossed home on Burleson’s ball in the dirt.

Slavens’ three-run homer to right field in the ninth highlighted a four-run frame by Wichita State, 6-1. David Vanvooren reached on a bunt single to start the inning then took second on Boyer’s sac bunt. After an intentional walk to Ritter put runners at first and second, Mason O’Brien reached on a fielder’s choice moving Vanvooren to third. Slavens took a 2-2 offering from Giles over the right field wall for his first long ball of the season.

ECU tried to rally in the home half of the frame scoring a run on Jake Washer’s solo blast to left field (11th of the season) capping the scoring at 6-2. The Pirates loaded the bases with one out, but Lindemann got Brickhouse to roll over a pitch sending a grounder to second to end the game.

Brady Lloyd led the Pirates offensively going 3-for-4, while Burleson registered two hits and drove in a run. Turner Brown, Chandler Jenkins and Washer each added a hit in the contest. Bryant Packard extended his on-base streak to 33 consecutive games with a pair of intentional walks.