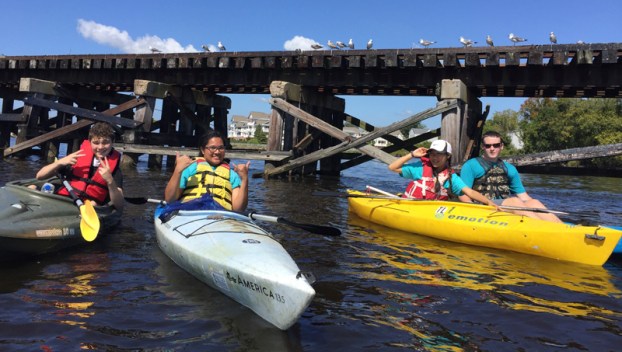 ON THE JOB: Evan Sapanoro, Isabella Daniel, Abby Yoon and Caleb Bronsink take to the Pamlico River in kayaks to collect trash on Sept. 21. The event was part of International Coastal Cleanup Day. (Dan Sokolovic)

The kids are alright

There’s been a trend in the Washington Daily News in the past two editions, one worth noting. It has to do with service and young people.

In Tuesday’s edition, readers had the chance to learn about the efforts of one local scout troop to help Pamlico Rose Institute for Sustainable Communities. The efforts of Scout Troop 21 were simple, yet meaningful.

For one Eagle Scout candidate, his capstone service project was to build six raised flowerbeds for the nonprofit to make gardening accessible for the veterans the nonprofit serves. For another young man, helping Pamlico Rose meant selling hotdogs to help the nonprofit raise money for its mission.

Both of these scouts, and the others who helped them, made a difference. All it cost them was their time and effort.

Looking back to last weekend’s edition, the spotlight was on another group of youth serving their community. Kids and teens with the new nonprofit Love a Sea Turtle led the way in cleaning up the Pamlico River. Setting out in kayaks, the young people took the initiative to take on a task that isn’t always a priority for their elders.

In both these instances, and undoubtedly many others, youth are leading the way when it comes to service. They’ve got passion, energy and a willingness to serve. They haven’t become jaded enough to just accept things as they are, and they’re willing to do something to make things better.

The stereotypes regarding the generation coming up now are not very flattering. Young people are painted as lazy, self-absorbed and too engrossed in technology to notice the world around them. The kids highlighted in these articles are proof that those stereotypes don’t apply across the board. On the contrary, it seems that young people are often the ones most eager to take action to make the world a better place.

The good book tells the youth, “Don’t let anyone look down on you because you are young, but set an example for believers in speech, in conduct, in love, in faith and in purity.”

These young people are setting a pretty good example, one many of us adults could stand to learn from. So next time you feel like railing about how awful the current generation is, think about all the good they are doing. The k