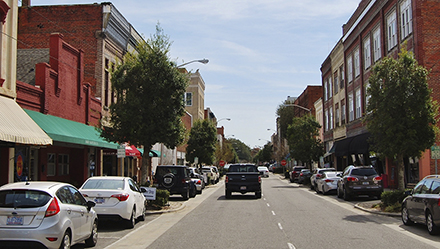 What happened to my hometown?

Thursday night, UNC-TV premiered “Weekend in Washington,” an 11-minute segment that’s all about Washington, complete with a few possibilities of where to stay, what to do, where to dine, where to shop and more. It was a highly flattering piece that, for those unfamiliar with Washington, could very well inspire a visit to a historic, Southern town with a vibrant downtown; a place fortunate to be perched on the banks of the Pamlico River and also fortunate enough to have local government over the decades recognize the importance of creating a waterfront boardwalk and park available to the public.

Unfortunately, with every bit of positive news, there are those who feel compelled to be a detractor. In this case, the response to the segment was: “What happened to my hometown? All the shops are run by transplants.”

First, there are plenty of downtown merchants who were born in Beaufort County and have remained in Beaufort County, continuously contributing to the local economy over decades: Big Bargain Furniture, Stewart’s Jewelry Store, Russell’s Men’s Shop, Bill’s Hot Dogs, Warren’s Sporting Goods, to name a few. There are several other Beaufort County/Washington natives who have set up shop downtown in more recent years. And, yes, there are the “transplants.”

To answer the question, “What happened to my hometown?” one has to go back a few decades to the 1970s and 1980s, when businesses moved out of the old storefronts downtown to newer, shinier spaces in strip malls and traditional malls. Perhaps the next look should be taken at the number of people who preferred to shop in Greenville, where there were two malls and more shopping options. Anyone who’s been around for 30 years or so can remember the days of empty storefronts downtown. Those stores mentioned above and others held the line, refusing to dig up roots and move elsewhere.

Fast forward a few decades: the renaissance of downtown Washington has been a start and stop affair. Unfortunately, many start-up businesses came and went, but each contributed to a growing momentum. A group of people getting together to save the Turnage Theatre became a catalyst, as a center for downtown entertainment was created. The arts council reinventing itself as Arts of the Pamlico and making its home in the theater prompted even more growth in the number of galleries opening their doors; in the number of restaurants and retail stores surrounding them.

What happened to my hometown? Investment — personal investment by those are from here and those who have chosen Washington as their home; those “transplants” filling the gap where many local people gave up on a downtown revival long ago.

Today, there’s hardly an empty storefront downtown. Construction abounds, as more businesses are moving in on the ground floors, and more upper stories are being transformed into living space upstairs. Thursday night, the sidewalks, restaurants, stores and galleries were full of people on the annual Fall Crawl, many of them native-born, many of them “transplants” and all of them welcome.

That’s what’s happening in your hometown, and in this season of thanksgiving, it’s something to be thankful for.

Those looking for help to navigate signing up for Affordable Care Act can find it in a variety of places... read more