Attorney to school board: No one has done what you’re proposing to do 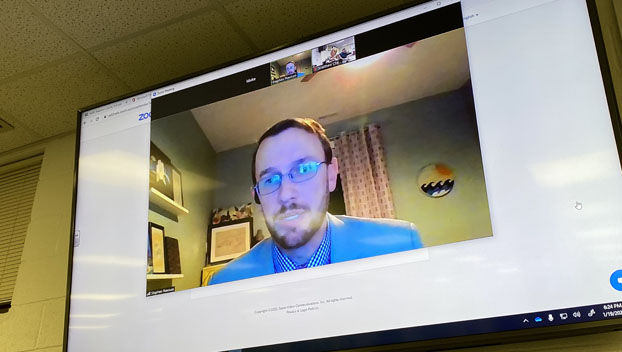 In the wake of Sheriff Ernie Coleman’s decision to end the memorandum of understanding through which some deputies served as SROs around the district, school system administrators have decided to seek bids for SRO services from third-party companies. Rawson, an attorney from the Raleigh law firm Tharrington Smith LLP who is helping the district through that process spoke to the Board of Education on Tuesday through a video call.

“To my knowledge, no one has done what y’all are proposing to do, which is to contract with an independent company police force that already exists,” Rawson said.

“So you would not be the employer for those officers,” he added. “You would be contracting out with a private entity who is authorized by the Department of Justice to run a company police force.”

Rawson said some community colleges and private schools have taken that route to provide school security, but he isn’t aware of any North Carolina public school districts that have done so.

There are approximately 60 company police forces in North Carolina, Rawson said, and most of them were designed for a single corporate or local government entity. Those police forces tend to be small, but there are a few that Rawson believes would fit Beaufort County’s needs. He added that there is some interest locally to start a new police force that would bid on the BCS contract.

While it is legal for the district to contract with a third-party company police force, there are some limitations to consider.

Any company police force the district decides to go with will consist of sworn police officers. They’d have all the rights and privileges of other sworn law enforcement officers, and they’d be able to do things like carry weapons, issue citations, get warrants, make arrests and detain people.

But company police forces don’t have territorial jurisdiction outside of the entity they are contracted with. That means the officers can operate within the boundaries of a school campus, but they are unable to, for example, conduct traffic control on the roads around the school because those are public transportation rights-of-way. The district’s current SROs don’t have traffic control duties.

Rawson said there is a law that allows for mutual aid agreements between the company police force and a local law enforcement agency — whether it’s a local police department or the Sheriff’s Office. School board member Terry Draper says he’ll likely have more questions later on about mutual aid, especially given the recent interactions between the school district and the Sheriff’s Office.

Company police officers don’t have qualified immunity, a legal principle that protects government officials from lawsuits in which the plaintiff claims that the official violated their statutory or constitutional rights, unless there is evidence that the officer violated a “clearly established right,” according to Cornell Law School.

However, because the school district would be contracting the officers rather than employing them, the company would carry its own insurance

“And that goes to some of the advantages of the model that y’all are looking at, which is that you’re not employing these officers,” Rawson said. “So they’re not your direct employees — you’re not immediately liable for their activity, although it’s possible that liability could flow, depending on the circumstances, to the district as the contracting entity.”

Rawson said he has a draft of a request for proposals that he’ll be discussing with Beaufort County Schools administrators to make sure it meets their needs.

Obtaining SRO services through agreements with local law enforcement agencies is a popular option among North Carolina public school districts, but several others have gone in different directions.

“A few districts have their own police forces, and those either come about through local legislation that allows the board of education to hire (officers) … but that has to go through the General Assembly for approval.”

The other option is for the district to seek approval from the Department of Justice to form its own company police force.

Beaufort County Schools is set on moving forward with its search for a third-party police force, but the other two options could become relevant again in the years to come.

In current circumstances, the length of time it would take for legislation to be pushed through the General Assembly wouldn’t be ideal for Beaufort County, given that the memorandum with the Sheriff’s Office is set to expire in June.