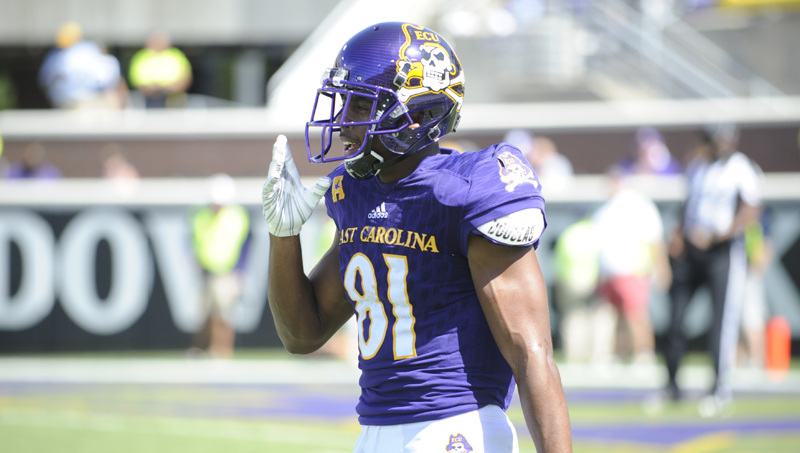 Jimmy Williams no longer has to worry about the balancing act that is the schedule of a collegiate athlete. The former Washington standout completed his last year of eligibility at East Carolina on Nov. 19, 2017.

His final season played out similar to his freshman campaign in that it was marred by injuries. But Williams continued to fight and made it on the field for 10 of the Pirates’ 12 contests in 2017.

Williams, who tallied over 1,700 yards receiving and 14 touchdowns, has one goal in mind now: to earn a shot to play professional football. He’s been completely dedicated to training for ECU’s pro day, which will be held in late March.

Gone are the days of waking up and going to practices or class. Williams now gets together with best friend and one-time Pirate Jacen Murphy and heads over to workout with former Pam Pack, Pirate and NFL receiver Terrance Copper at his Premier Sports Academy.

Some days they’ll be working on foot speed. Others they’ll spend on jumping. They try to develop strength and endurance. A lot of the focus is on explosiveness in the drills for pro day.

“It goes hand-in-hand with everything we’ll be doing as far as testing goes,” Williams said. “Everything we really do is explosive. Even benching, you don’t want to be super slow with it. You want to be explosive. It’s not a whole bunch of strength training.”

Read more: Jimmy Williams is laser focused on making it to the next level

Then there’s the football component. For example, Williams counted 188 balls thrown his way last Wednesday. That’s a light day. He said that number is usually over 200. Whatever he’s doing, Williams just wants to be a little better each day.

Route running is a skill Williams has sought to develop over the last few years. He came a long way. Head coach Scottie Montgomery and others on the ECU staff last year praised him as one of ECU’s best in that regard.

“That was my big thing coming into college. I didn’t really know how to run routes,” Williams said. “It’s something I always wanted to be better at. All the coaches that I’ve had, they’ve always criticized hard on route running. When I go out on the field, I want to work on my route running.

“I want to be able to get open all the time. I never want to be covered. I hate being covered no matter if I’m getting the ball or not.”

All of the training is in depth. With routes, Williams dials in on just one or two per session. He wants each route and the coverages associated with them to be automatic.

“It’s not like we’re out there working on the fade and the slant and the out and the post,” he explained. “Every route we do, we do it against every single coverage you’re going to get, so you get six or seven different coverages. … Off the top of my head, I know what to do.”

Williams said he takes pride in that aspect of the game, and he knows opposing defensive backs pride themselves in their coverage. It’s not just knowing routes, though. Williams’ work ethic has been always been a badge of honor. He knows putting the time and effort in is one thing he can absolutely control.

This story is the first in a series on former Washington and ECU receiver Jimmy Williams. Check each Wednesday issue of the Washington Daily News leading up to pro day on March 29.