Football first for as long as Williams can remember 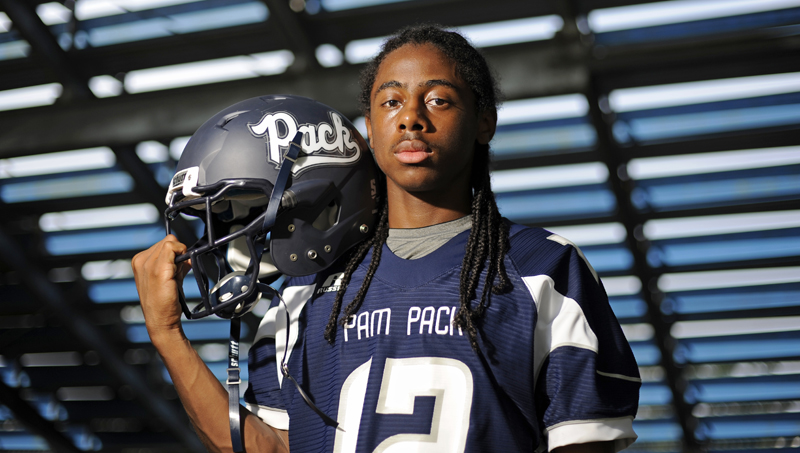 Jimmy Williams, then the Pam Pack quarterback, poses for a photo during the 2012 football season.

When Jimmy Williams was 5 or 6 years old, he’d put his mattress up against the wall in his bedroom. He’d get a running start and jump into it as if he was jumping over offensive and defensive lines and into the end zone.

Football has been Williams’ love since childhood. His natural athleticism and competitive drive made the perfect recipe for an elite athlete.

It had its detriments, too. Williams didn’t get involved in the Washington Youth Football League right away. He wasn’t too fond of some of the restrictions in flag football.

“I just always had a ball in my hand. I didn’t care too much to play organized, but I knew that I wanted to play football eventually,” he said. “I hated flag football. That’s what threw me off a little bit. I started playing when I was 6 or 7, and in flag, you can’t jump over people. You can’t stiff-arm.

“If somebody falls down in front of me, I’m going to jump over them. I knew that if I jumped, they couldn’t really grab my flag, so I was running and jumping through the line. They’d call back my touchdown, and I’d be so mad.”

It was a waiting game. Williams reached the age to play tackle football. He said that’s around when he really fell in love with the sport.

That aggressive aspect to the game manifested early. He’d hurdle defenders in youth games. Years later as the Pam Pack’s quarterback, he’d weave through linebackers and defensive backs en route to a touchdown.

The years continued to pass. Williams doubled down upon arriving as a walk on at East Carolina. The access to top-notch weight training and nutrition programs, among other amenities, didn’t hurt.

Before long, Williams didn’t need to dodge defenders. He took them head on. His final home game with the Pirates — a 48-20 win over Cincinnati on Nov. 18, 2017 — saw him bulldoze his way into the end zone. He caught the ball at the 11-yard line early in the second quarter. He kept his legs moving, despite Bearcat linebackers and defensive backs converging, and pushed forward for the final five yards. Jimmy Williams makes a catch and looks down the field in a 2016 game against South Carolina. He had two receptions for 44 yards in that game. (ECU Athletics Communications/Contributed)

Football is and always has been his one, true love. Williams, like many children, dabbled in other sports. His athleticism helped him be a decent contributor on the basketball court.

After fall would come to a close, Williams would exchange his football jerseys for Pam Pack basketball jerseys. His nine points per game as a junior ranked second on the team.

It was admirable, but nothing compared to the way he’d weave through linebackers and defensive backs, or some of the bombs he heaved to his Pam Pack receivers.

This love is something Williams has passed on to his 4-year-old son. It’s likely something he picked up idolizing his father, but some of it had to have been innate.

“First thing we do when we get to my mom’s house, it’s, ‘Hey grandma, can I see your iPad so I can watch football,’” Williams said. “I sat down with him and had a puzzle. He did it for five minutes and he’d pick up his football again.”

If anything, it makes spending time with his son easy on Williams. They both love football more than most anything in the world. A day spent tossing a ball and watching highlights is a day well spent.

Williams’ son has grown up watching his dad make Division I defensive backs and linebackers look silly. Now, with ECU’s march 29 professional timing day closing in, Williams wants nothing more than for this passion to translate to an opportunity in the NFL.

This story is the fourth in a series on former Washington and ECU receiver Jimmy Williams. Check each Wednesday issue of the Washington Daily News leading up to pro day on March 29.