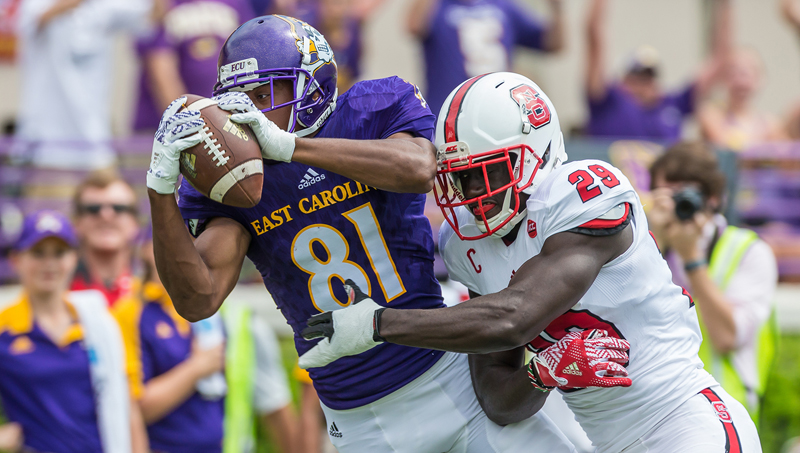 Jimmy Williams powers past an N.C. State defender during ECU’s win over the Wolfpack in 2016.

Wake up, train, come home and relax, and go to sleep.

Sprinkle in a few other day-to-day activities in there, and that’s what Jimmy Williams’ life has been since East Carolina’s football season came to an end on Nov. 25, 2017.

It’s all building up to ECU’s March 29 pro-timing day. In just over a week, Williams will get his shot to impress NFL scouts. It’s been his dream since a young age to play professional football, so this is what he’s been working toward for more than just the last few months.

Williams has been developing one overall trait: explosiveness.

Explosiveness is the key to Williams’ training. ECU fans — and, just a few years back, Washington football fans — know he’s explosive; he bursts off the line of scrimmage as a receiver. Back in his Pam Pack days, Williams exploded with a jolt of speed any time he found some open space.

It’s a trait he has. Now it’s a matter of applying it to everything he does. Williams wants an explosive start to his 40-yard dash and other timed drills next week. He doesn’t want to struggle with later reps on the bench press. Each one will be crisp and explosive.

“You have your strength training within this, but it’s not just loading the bar up with weight and trying to make yourself super, super strong,” Williams said. “It’s a lot of explosiveness. We do a lot of high-rep stuff. You get your strength with it, but you’re building up your muscle endurance.

“You’re not just doing everything off of raw strength. It’s helping your muscles, as well, because you’re not putting all this stress on your body before you get to your pro day. That’s a good way to hurt yourself.”

It’s another example of how Williams is taking everything he’s learned up until this point. His time with the Pirates gave him access to a renowned strength and conditioning coach in Jeff Connors. He had top-notch facilities at his disposal. He learned about nutrition and how to maximize his own body’s potential.

The result? The skinny, injury-prone Williams that entered the Pirate football program in 2013 at 167 pounds now tips the scales at 199. He’s stronger, he’s faster, and he’s more durable.

And Williams is only getting better. He’s spent the last few months dedicating himself to training with former Pam Pack, Pirate and NFL football player Terrance Copper at his Premier Sports Academy in Winterville. He’s worked alongside best friend Jacen Murphy, who took part in his pro day on Monday.

Williams has taken all he’s learned about everything surrounding the game of football and applied it to training for this one opportunity that’s rapidly approaching.

This story is the fifth in a series on former Washington and ECU receiver Jimmy Williams. Check each Wednesday issue of the Washington Daily News leading up to pro day on March 29.