Seahawks set the bar against Pungo 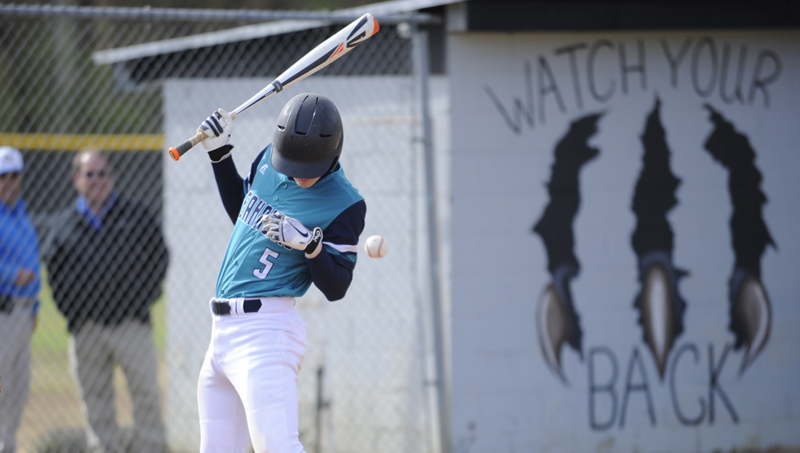 Josh Toler is hit by a pitch. Many Seahawks took a base the hard way.

PINETOWN — Southside took a little while to settle in Saturday morning, but eventually set the mark in a 13-2, five-inning win over Pungo in the opening game of Northside’s Easter tournament.

Brantley Cutler allowed the first two batters he faced to reach. Pungo opened the scoring when Cruz Eakes came home on a passed ball. Cutler issued one more walk to load the bases, but struck out the next two to escape the jam.

The Maryland-Eastern Shore commit settled down after that and went the distance. He finished with 12 strikeouts in five frames.

“He needed today, confidence-wise. He came out and struggled early on,” Southside coach Kevin McRoy said. “Once he got through the first inning, he was more comfortable and threw more strikes. … He needed to catch a break. Hopefully, he’ll build on that for the rest of the season.”

Southside drew even when Will Warren’s sacrifice fly scored Josh Toler in the bottom of the first. Toler didn’t start the game, but came in when leadoff batter Cody Modlin took a foul ball to the mouth.

Cutler helped produce a lead the Seahawks would never lose when he ripped a single through the right side that the Raiders couldn’t field. The outfield error allowed Cutler to make a round trip, following Demetrius Ebron and Hundley Stallings, for a three-run play.

“Early on, we were putting the bat on the ball, but hitting it right to them,” Southside McRoy said. “As the game progressed, we started finding holes and were able to score some runs.”

Pungo got one back in the top of the third. Ryan Bishop led off with a base hit. He made his way around to third before scoring on a passed ball. Pungo sophomore Miller O’Neal tosses to a Southside batter in the first inning of Saturday’s meeting.

The Seahawks, leading 4-2 midway through the third, took control shortly after. Pungo made a pitching change at the beginning of the frame. Lead-off man Davis Porter was hit by a pitch, and Dylan Humbles followed that with a knock into shallow left field. They’d both make their way home to double the advantage to four, 6-2.

Then Southside erupted for seven in the fourth. It was smooth sailing from there. The Raiders made another change on the mound in the middle of the inning, but couldn’t do much to slow the high-flying Seahawks.

“It’s all mental for us. We made two errors that pretty much cost us,” Pungo coach Neal O’Neal said. “We’ve just got to come together. We only have two seniors and one junior. … It’s going to be tough for us, pitching wise, coming up Monday.”